Last week I didn’t have much time to write a recap, but this week I’m back. We’re getting closer to the end of the season, some secrets are revealed and some questions will get answers. In my opinion that was one of the best episodes of the season with episode one.

Let’s start with Art and Krystal. After strange meeting with Donnie, she decided to go to the police station and ask for protection and help. Art calls Felix for help, and that’s the only funny moment in this week’s episode. Kyrstal recognizes him from before she was kidnapped, but Art introduced him as an inspector from Scotland Yard. Blonde clone knows so much, but she’s not aware of anything is going on around her. She also knows what happened to Delphine. She tells Fe and Art that she saw when the doctor were shot, and it’s all what we know for now. 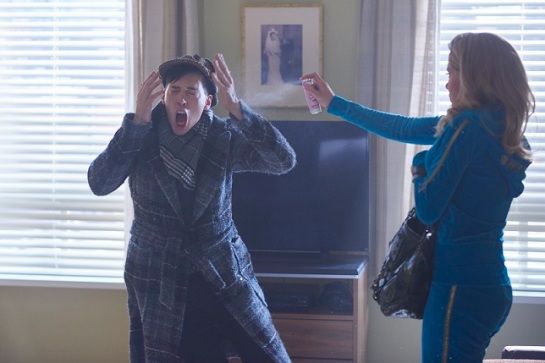 Sarah meets other Castor clone, and also finds out what that bugs exactly doing. They do different things for different people, for sure they manipulate genes. Dr. Leekie’s, for example, treated a genetic disposition for Alzheimer’s. Sarah’s was supposed to make her sick since she’s immune to the Leda disease.

We could see Beth, and what she has done on her last day, before she died. She found out that Susan Duncan is alive and she wants to kill her, but she changed her mind. Instead, she attacked Evie.

Cosima had a huge part to play this week, even bigger than last week. Cosima, Sarah, and Susan Duncan strike a deal that seems to benefit everyone, the sisters hand over Kendall Malone’s genome, which can be used to restart the human cloning project, but also to work on a cure for the Leda disease, and Sarah gets the implant removed from her cheek.

After going to Brightborn with Sarah and assisting as the bug is removed, Cosima stays with Evie while Sarah goes back to Felix’s loft, where Scott takes Kendall’s blood to separate out the correct cells. After that things start to go really wrong. After Scott done what he had to, Malone kidnapped as soon as she leaves the loft — but not by Susan, as the first thought was, or even Ira. Evie Cho stays behind this, I’m not sure what she’s up to. As far as we know she wants destroy Leda the most. The person who kidnapped Kendal, is that weird detective, which is probably a part of Neolution. Evie brought Cosima to place where the detective’s waiting with Kendall. That’s a final goodbye before Kendall gets shot and the van she was kidnapped gets on fire. This situation eliminating any chance of getting more of original genome. Cosima had enough, and Evie delivers, I think the most devastating news, by telling young scientist, that Delphine was shot dead in a parking garage.

And then there are Evie’s last words to Cosima:”Tell Susan the original is dead. Tell Sarah its over. Or Beth died for nothing.”

I’m not sure what Evie said about Delphine it’s true. I think Cormier is alive, and she’s hiding somewhere. Chan only wants to destroy Leda, and create new, better DNA. She knows when she says something like that Cosima might give up on research, and dies after all. That was so painful to watch Cosima like that.

It’s too bad that we couldn’t see Alison, Helena and Rachel more, but not every week we can see all of them. Two of them we’ll see next week for sure. I would love to see Vera again, maybe she can help her sisters somehow.

As I said at the beginning, that was really good episode, fast action, a lot of happened. And as always great music choice. At the end of the episode we could hear song Burn from Cody Crump.

One thought on “Recap: Orphan Black S.4 Ep.6 ‘The Scandal of Altruism’”