The first question from this episode: Is Dolores becoming conscious?

The episode begin with a meeting between Dolores and Bernard, who’s been giving the host books to read “Alice’s Adventures in Wonderland.” Dolores in general seems to be changing, and more importantly, remembering the things that have happened to her in past loops. Perhaps that’s why she starts to wanting more with Teddy, the fact that she’s just now becoming aware of the fact that things can change.

During the reading we can hear one quote: Who in the world I am?

In that case, the viewer starts to think about it, is those hosts became humans somehow? In hosts “minds” they are real, they’re not aware of the loops they’re live in. For the residents of Westworld, the Newcomers are like guests from another country, who came to see another culture. But what if this creature starts to be aware, what can happen to the guests?

We can see a little bit more about what Man in Black done with Dolores. He didn’t rape her, like we could think at the beginning. He has probably done something with her software. Maybe upload something, that she can remember what happened in the past. 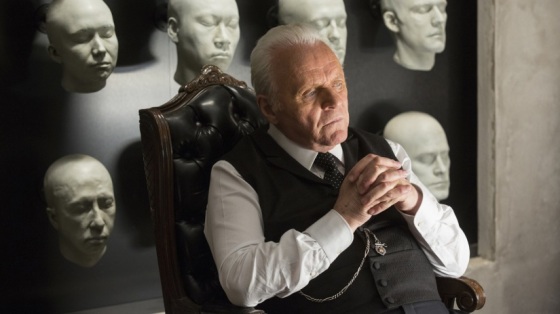 Meanwhile, William and Logan, finally begin to really explore the adventure available in Westworld, which escalates in this episode with the beginnings of Dr. Ford’s new narrative, one that leads him to finally create a backstory for Teddy.

While Ford is telling to Bernard about the story of the park, we can find mysterious Arnold is. Ford explains to Bernard that Arnold was his partner in developing the Westworld hosts, but that Arnold wanted to create consciousness, building of a pyramid of memory, improvisation, self-interest, and at the top, the “voice” of the Creator. Arnold died in the park under dubious circumstances and Ford wants his fate to be a lesson for Bernard: “Don’t forget, the hosts are not real. They’re not conscious. You mustn’t make Arnold’s mistake.”

This show asks one good question: what makes us human? Our bodies, awareness, or our emotions? Guests in Westworld seem to forget about emotions and feeling, they’re in power to do things they would never do in the real world. They’re killing hosts in cold blood, because they can do that, just like that. In other side, we have hosts, which are able to feel, sadness and fear. The viewer sometimes can forget that, those are just machines.

And when I discover who I am, I’ll be free, said Dolores, during the conversation with Bernard. What does it mean for her, to be free?

After this episode we can have more questions: Who’s that voice Dolores hears? How long before a host hurts, or kills, a human?

What’s your thoughts about this episode? Any theories? Let me know! 🙂